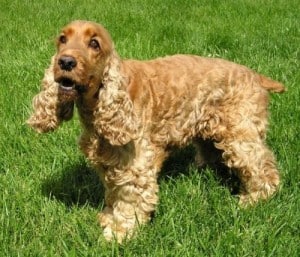 This is Sharda with another Cocker Spaniel newsletter.

Let’s start shall we?

If your purpose for getting a Cocker Spaniel is strictly as a pet, the matter of which sex to pick is more one of personal preference or of no preference at all.

It’s possible that if you’re introducing a new Cocker Spaniel puppy to a home with an existing dog, getting one of the opposite gender might make for an easier integration.

Male Spaniel dogs are not the only ones that ‘hump’ or mark territory.

Humping other dogs or human legs is actually a sign of dominance, not just a sexual behaviour.

She may also lift her leg when peeing.

So if you have a dominant female, don’t be surprised if you see these behaviours upon occasion.

As with humans, female Cocker Spaniels tend to be more sedate and upon occasion may be more affectionate and sensitive. Males are often more independent.

If you intend to breed your Spaniel dog, then the choice of sex takes on more importance. If your goal is to become a breeder, you would most likely want to start with a female so that you can obtain your own stock (it is customary that the female owner keeps the puppies, paying the male owner a stud fee and/or choice of puppy).

If you only wish to collect stud fees, then you’d obviously want a male. The unspayed female Spaniel dogs will go into ‘season’ twice a year, making a mess around the house with bloody discharge, plus she’ll be more moody or dare I say ‘bitchy’.

If you don’t intend to breed or show your Cocker Spaniel, you should have it spayed or neutered. Note that neutered dogs are disqualified from shows but can still compete in field and obedience trials.

Spaying or neutering reduces the risk of your Spaniel dog contracting cancerous tumors and other gender-specific ailments such as ovarian cysts or false pregnancies in females.

The following chart summarizes some generalities in gender differences and is based largely on theory.

These are not cut and dry rules and most longtime dog owners and breeders will tell you that other than physical differences, the exact opposite seems true.

Breeder Cindy Hall of CM Cocker Spaniel puppies has the following additional observations specific to the Cocker. “I have found that the males are much more affectionate and loving.

They are more outgoing and sure of themselves always showing a sense of confidence,” she says. She also believes that males show little moodiness and are less prone to emotional swings.

“A male dog is always eager to please his owner, he takes very quickly to children and is more accepting of other pets,” she says.

Her years of experience in observing male and females have led her to believe that females can be emotional and sulky if they don’t get their way.

The female will be playful as a puppy she says but tends to sit back and watch as she gets older, while the males remain playful even in their elder years. “The males love to be in the centre of the action and become a huge part of the family.” “The female is also the queen,” Hall continues, “she is the boss, she can have mood swings where one minute she is just as sweet [and] can be right in the middle of all of the action and the next minute a little grumpy and wanting to be alone,” she concludes.

Regardless of which sex you choose, having your Spaniel dog spayed or neutered will help reduce or eliminate bad behaviours and reduce the risk for certain gender-specific health ailments.

Benefits In Buying An Adult Golden Retriever
Feeding your pug the right way!
Poodle Dog Diseases You Need To Know About
Dog Food Recipes for Pugs: What They Need and What You Need to Know
Questions To Ask Cocker Spaniel Breeders
West Highland Terrier Supplies
Preparing Your Cocker Spaniel Home
The Causes Of Dog Constipation And Easy Ways To Prevent It
Lhasa Apso Get Along Other Dogs And Pets In Your Home
Is The Basset Hound Right For Me?
Dog Skin Problems With Cocker Spaniels
Dealing With Bad Dog Eating Habits