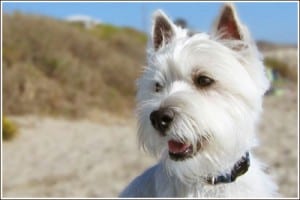 This is Sharda again for another West Highland Terrier newsletter.

The West Highland White Terrier, or Westie, was first bred in Scotland in the early 1700’s.

It descended from the short-legged, wiry coated little Highland Terrier that was the most common dog in Scotland at that time.

There were several colours of this Highland Terrier, but the dark colours were more favoured by the population.

The Highland Terriers of all colours were used for hunting small game, and were valued for their boundless energy and strong hunting instincts.

They were excellent hunting dogs for controlling the population of rats, fox, otter and other vermin. They not only chased and tracked game, they would also burrow into the ground and dig to retrieve vermin.

These dogs were not bred as house animals, and their wiry hair repelled the wind, rain, sleet and snow typical of the Scottish climate. They quickly developed a very hardy and robust constitution that has remained with the breed.

Since there were few roads and very little traveling taking place, the terriers tended to stay in the same area they were born, and several area- specific breeds of terriers were developed.

The Malcolm family, in the late 1800’s, began to breed the light wheaten and white coloured Highland Terriers, and thereby developed a type of terrier based on colour.

Legend has it that a favourite reddish coloured terrier of the Malcolm’s was mistakenly shot for a fox on a hunt, and Col. Malcolm decided that he would only breed white dogs from that time forth to prevent any further mistakes!

The breed was originally called the Poltalloch Terriers or the White Cairn, after the estate that the Malcolm family lived on in Argyllshire, Scotland. Dr. Flaxman of Fifeshire and George Clarke also developed strains of white terriers that originated from the Highland Terriers.

In England the first dog show that had a category for terriers was in 1860, in the city of Birmingham. Glasgow first had a terrier group in their show in 1871.

The Scottish Kennel Club Show (in Edinburgh) first had a separate classification for Westies in 1904.

THE MODERN WESTIE
The modern Westie has changed very little in appearance, temperament or demeanour since they were first bred is Scotland. They still retain their natural intelligence and hunting instincts, and are known for disappearing after a squirrel or cat in the neighbourhood. They often become so involved in the hunt they do not respond to calls or commands to return.

They enjoy a lot of exercise, and need to have room to run and explore. They will wander off, so do need to be fenced or on a leash. They love to play, and are good with children in the family. They do tend to be a bit excitable, however, so a lot of activity and noise may be unsettling to them.

As could be expected with this hearty little terrier, there are few health concerns with a Westie. They are a somewhat prone to skin allergies, but routine grooming and monthly bathing can help manage any conditions.

They are very easy to train, and love to use their natural intelligence to show owners how smart they are. They are keen to please, and obviously enjoy being praised and rewarded. They do tend to bark when strangers come to the house, but they are not usually nuisance barkers if properly trained as puppies.

Westies love going everywhere with their owners. They enjoy walks and being outside no matter what the weather. They are known to be very enthusiastic travellers in cars or even in boats. If socialized properly, they get along with other dogs, cats and people.

Tips on Housetraining Your Puppy or Adult Dog

Crate Dog Training – Tips to Do It The Right Way!

Schedule Your Boston Terrier vaccinations
Questions for Lhasa Apso Breeders When You Find One
Your Miniature Schnauzer training tips
Find The Best Miniature Schnauzer Breeders
Dog Food Labels: What To Look For?
Pekingese Socializing With Your Other Pets
Lhasa Apso Puppy Needs And Supplies When It Gets Home
Owning A West Highland Terrier: Know Your Rights!
The Boston Terrier Pet – Is The Boston Terrier The Dog For You?
How to Train Your Westie – Dog Obedience and Training Basics
How to feed your Labrador Retriever
Poodles