How Much Is A Labrador Dog? 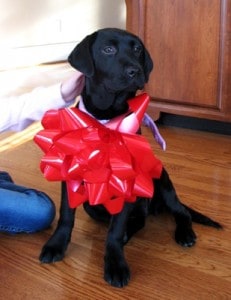 This is Sharda again for another Labrador Retriever newsletter.

How much is a Labrador dog?

There are a huge number of factors that can influence the cost of a Labrador. One of the biggest factors is the line, or breeding lineage that you are looking for.

A Labrador that is not a proven show dog, or is not from championship lines will be far less expensive than a puppy from two proven champions.

In addition, it also makes a difference in the price of the puppy as to which kennel it is from.

Well-known kennels with championship lines and many different awards and types of recognition will usually charge considerably more for their puppy than a smaller kennel that is breeding less well known dogs.

When considering how much to pay for a Labrador puppy or dog, it is important to keep in mind what you wish to do with the pet.

If they are going to be shown either in obedience, in the show ring or in hunting trials you will need a dog that meets breed standards and is from a line that has proven themselves in the respective show area.

If you wish to have a dog that is a companion, pet and friend it may be less important to look at the specific champions in the line as long as they are healthy, well dispositioned and genetically sound animals.

There are three basic places to obtain a Labrador puppy. The most desirable is a reputable breeder that is actively engaged in promoting and preserving the quality and standards of the breed.

These breeders are often located in smaller centers, in areas where the dogs have room to run and be active, since the breed does require a lot of space. Usually breeders will show their dogs or will enter them in various competitions and events ranging from obedience to agility, show, or even in hunting events and trials.

A reputable breeder may have a waiting list for puppies, and often does not advertise puppies for sale as they have potential buyers already waiting. Typically, a breeder in the United States or Canada will sell a puppy from an average line for between $400 to $1000, with males and females typically priced very closely.

In the United Kingdom, a Labrador puppy will sell for £350 to £900, although championship lines in any country will easily be double these prices.

There are also breeders known as backyard breeders. These are individuals that may have one or two dogs, often that are purebred, that occasionally have a litter.

They often are not as aware of the various conditions within breeding lines, and may not be aware of all the breed standards, meaning that even though you may purchase a puppy that is a purebred, he or she may have serious faults or even disqualifying features that will prevent them from entering the show ring.

Many backyard or private breeders have excellent puppies that are well cared for and socialized, vaccinated and health checked, but they often don’t offer the same guarantees that a larger breeder will.

The other great option, especially if you wish to own a more mature Labrador that will not require special training and housebreaking, is to obtain a mature Labrador from a rescue.

A dog from a rescue will be spayed or neutered, vet checked and vaccinated as well as have some information on the dog behaviors, how well socialized it is, and any particular habits or tricks that the dog already knows.

Many people still buy puppies, Labradors included, from pet shops. While it is tempting to get emotionally caught up in all those cute faces peering through the cages, it is important to keep in mind that ethically reputable breeders do not ever sell through pet stores.

Most of the puppies in pet stores come from puppy mills, horrible, crowded dog farms where female dogs are bred over and over to produce as many puppies as possible. There is little consideration to the breeding lines or health issues, and most puppies are ill, genetically inferior, and often well below breed standards.

Even though all pet stores sell their puppies are purebreds, there is often difficulty in registering the puppies and very few ever make it to the show ring.

By spending a little more, and buying from a reputable breeder or getting a full grown dog or puppy from a rescue, you can be assured that you are bringing home a health dog that will become a part of your family.

Determining if you want a purebred or Labrador mix is also another consideration, and again, the future of the dog and what you would like to do with the dog is very important in making this decision.

I hope you learned a lot from today’s Labrador Retriever Newsletter.